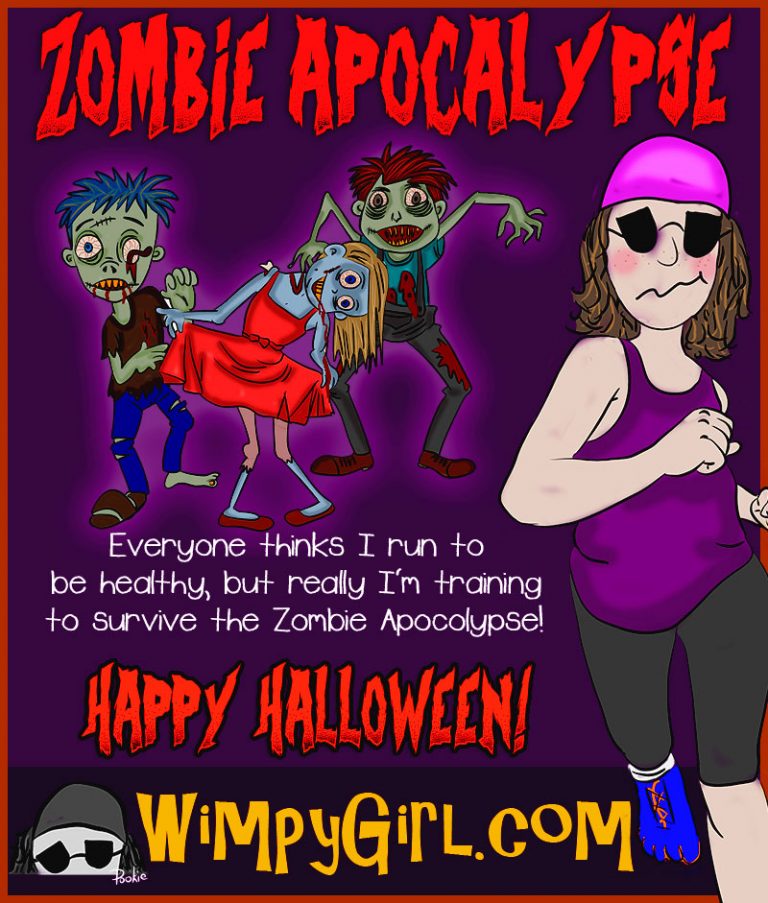 Never in a million years would I have ever imagined that I would love zombie stuff, but I do. Capt’n Clean does too. We are over the top excited when a new zombie flick comes out and have seen just about all of them. It’s not quite, but almost up there with I Love Lucy for me.

I guess it has to do with our thrill about being scared and our ability (in a fantasy world) to be prepared for any kind of emergency, because you just never know…

If you are a runner or walker or hiker you might want to add a splash of fun to your workout with Zombies, Run! It’s a free app that helps you push yourself a little harder on each workout. You can download it at Google Play or the Apple App Store. Once you have the app, set your preferences, and then enter a world of zombies as you do your run. The app will cleverly tell you when to speed up, because you are being chased by an undead creature that can be fast or slow depending on your settings and which adventure you choose. You can win all sorts of awards as you go on virtual missions to save the world from zombies. In the meantime, you become faster and more fit. Go figure.

So, Zombies, Run! really got me to thinking about whether I could actually outrun a zombie. As I get older, I like to envision my zombies as being slow and sluggish so at least I would stand a chance.  But zombies come in all forms and move at very different paces. So, in the spirit of the season, here is a list of zombie types and their speed levels, as well as our favorite movies that showcase each. Walkers are the most prevalent type of zombies in movies. They may not be immediately threatening, but they do attack, and usually attack in groups. They are the monsters in the Walking Dead comic book and tv series, as well as the classic movie, The Night of the Living Dead. They are carnivores and crave human flesh and can only be destroyed by head removal or brain explosion.

I could probably outrun (okay, outwalk) a Walker, but I figure I’d better not neglect my upper body strength as I train at the gym, just in case I have to deliver a robust blow to their noggins.

I can handle Walkers. Runners are nasty zombies who are able to run at a full sprint. They attack their prey in a frenzied manner. It’s impossible to outrun Runners, because they don’t tire like humans. But you can stop them by disabling their legs, or, well, just blowing them up. These fiends can be found in World War Z, Zombieland, Z Nation and many others.

I’d probably be toast if one of these beasts came after me. But at least, if I become one, I’d be fast! My favorite zombies are Crawlers. I know I could always get away from them, but they are still annoying. Crawlers are Walkers or Runners who have a disabled or no bottom half.  They must support their bodies with their arms and thus are slow. However, because they are close to the ground, they can be hard to spot and thus are dangerous. My first experience with zombies was as a kid watching the Saturday afternoon matinee of Jason and the Argonauts at our local movie theater. Gosh, I loved that movie. I will never forget the scene where the bad guy tosses the Hydra’s teeth across the ground and an army of skeletons sprouts up and attacks Jason and his crew. Check it out.

I’m not exactly sure if the skeleton army men in this scene were real zombies, but they were every bit as dangerous. To me, these “Bonies” are just as scary as their cousins who still have flesh. Did you ever read the novel or see James Patterson’s Zoo? I did both. Holy Moley! These were some bad animals. Patterson’s critters have super zombie powers and the “defiant eye” which helps humans identify them. They are not cute, not cuddly and are not to be messed with. Last year, Capt’n Clean and I watched a movie called The Crazies. This one blew us away, because in it humans were infected with a bio-warfare agent that caused them to become murderously insane. They look normal but have the irrational drive and power of zombies. They don’t lose their intellect or memories and can use weapons.

To me, this is the scariest zombie of all. They could be anyone. The only saving grace is that after being infected, a crazy zombie dies within 48 hours. Whew!

So, are you training for the Zombie Apocalypse? If you are, I’d wager to say that you are well on your way to handling just about any emergency that life throws at you. Zombies are the monster of choice for emergency preparedness.

Tonight, as you greet and distribute candy to the ghosts and goblins of your neighborhood, be cautious. Check out the way they move. Are they walking, running or crawling to your doorstep? Peer deeply into their eyes scanning for any signs of craziness or defiance.  And, most importantly, make sure you have on your running shoes. If any of the costume-clad creatures give you reason to believe they might be zombies, slam your door and run, baby, run!

Have a Happy, Safe Halloween!