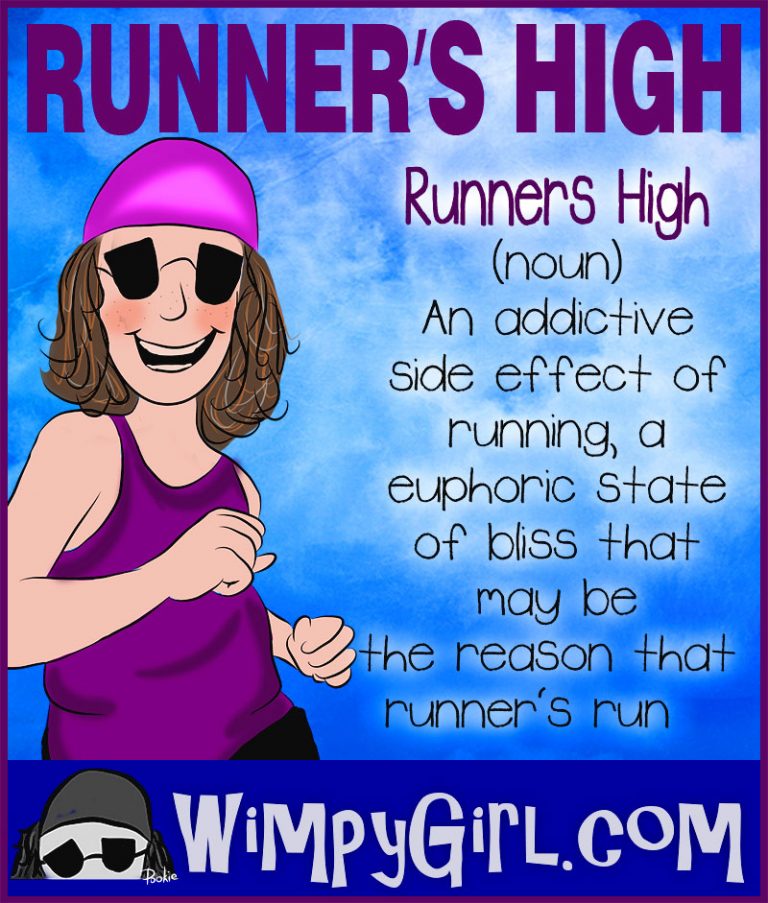 Running or any kind of exercise can be addictive, but in a good way. It can make you high. I’m not talking about a psychedelic, green fairy kind of high, but rather a feeling of euphoria or bliss that occurs during or after exercising or running. Okay, I’ll admit that not everyone who exercises or runs will feel runner’s high, but for those who do, ooh-la-la, it often helps them persevere through the pain and drudgery of a heavy workout just to hit nirvana. It is your body giving you a little reward for all your effort.

While you are running or exercising your body produces a number of chemicals called endorphins. When you are really pushing yourself they are released. This endorphin boost to the brain activates the part of your brain that secretes dopamine. Dopamine is that “feel-good” brain chemical and it, along with the endorphins, makes you feel exultant while exerting yourself. Sometimes it’s brief. Sometimes it lasts a while. But for me, it gives me a huge dose of confidence and a feeling of peace that all is well with my body and, well, the world. It’s my exercise happy place.

I’ll Have What She’s Having

If you’ve ever experienced runner’s high, you know it. If not, then you are probably wanting to. To get there you have to aerobically push yourself hard, but not too hard. Endorphins are the body’s painkillers and are produced in response to physical discomfort. But that doesn’t mean your workout should be excruciating. You need to find that sweet spot where your body is being challenged comfortably.

Music helps me get there. I listen to fast paced Broadway musical songs. I know, I’m a geek. But I imagine myself performing to the beat in Ethyl Merman style. In my head I imagine an audience and, of course, you can’t ease up when you are putting on a show. Ethyl never did. So, I keep it up until I get a standing ovation aka runner’s high. No roses are thrown at my feet when I get there, but it sure feels wonderful.

And, you know what? It’s good for you.

Many people ask me why I keep exercising and pushing myself at an age when I should settle for an easier fitness regime. I stammer about enjoying the accomplishment or joke about having to do it because I love ice cream. But truth be told, that’s only part of it. I do it for the high, the tension release, the giddiness and the overpowering knowledge that I am stronger than I was before.

Hello, my name is Wimpy Girl, and I am an addict.
I get high with a little help from my friend…exercise.
I am Wimpy Girl, watch me ROAR!