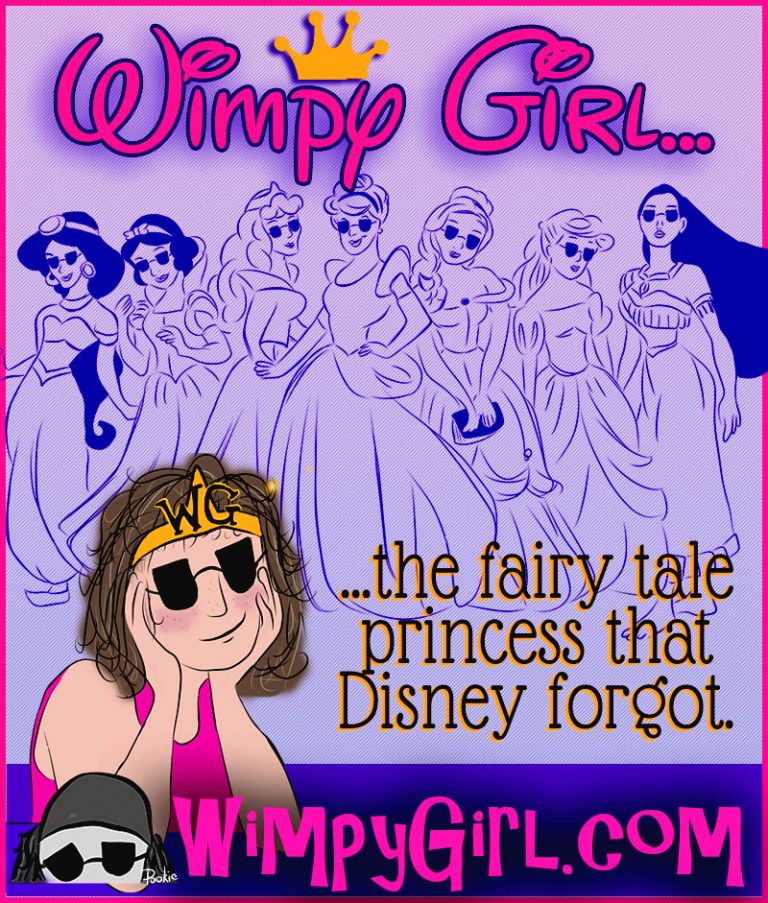 As kids we all romanticized and looked up to Disney characters, which is a good thing. All children deserve a little “happily ever after” magic in their lives. But I’m not so sure the Disney princesses that I adored as a child were such good role models.

In fact, most of them were pretty messed up.

Think about it. The actions of our idolized, precious Disney princesses just wouldn’t cut it in today’s society. In fact, most would be committed to a mental hospital, or at least be seeing a shrink. And, definitely each princess would have a fancy, smancy “disorder” assigned to them. See if you agree. Snow White is such a sweet, adorable, delicate little thing. Well maybe not so delicate. She was emotionally abused as a child and was kicked out of her house by her evil stepmother. Later on, said stepmom put a hit out on her! Now that’s messed up. And, that big-mouthed mirror didn’t help matters.

So, Snow wanders around the woods, crazy out of her mind and ends up couch surfing at the home of seven sloppy dudes, who were all suffering from Little Man Syndrome. Don’t you think that Snow probably had PTSD because of her family issues? She just wasn’t thinking clearly. She definitely was a germophobe and suffered from OCD because of her incessant worry about dirt, bacteria and contamination. She was controlled by a constant need to be cleaning something: her hands, herself, or the house of her roommates, which, by the way, was a great deal for the dwarfs.

Snow does get rescued by a prince who just happens to be a hunk. But, I fear that his “happy ever after” bubble may be popped if he ever leaves his underwear or socks on the floor.

After thinking it through, I guess I don’t want to be Snow White. And then there is Sleeping Beauty, our poor narcoleptic princess. This unfortunate girl is cursed at birth by an evil witch who got miffed because she wasn’t invited to the christening party. To prevent the curse from happening, her parents put her in the Fairy Witness Protection Program (FWPP). The princess is raised by three fairies in an isolated cottage in the woods under a new name and a false identity. As a result of the isolation, Aurora daydreams, spending most days in a make-believe fantasy world. And then one day a handsome stranger finds her in the woods. He is really a traveling prince. Go figure.

So, on her 16th birthday (the date the curse is to happen) the fairies do a “big reveal” by telling the poor girl that she is not who she’s been led to believe. Okay, that a biggie, but rather than letting her acclimate to her new self they whisk her back to the palace to live with her parents as royalty. Talk about traumatizing! Well, you know the story. The disguised evil witch appears with a spinning wheel and Aurora’s destiny of being finger pricked is fulfilled. Frankly, this is about all I have in common with Sleeping Beauty: we both suck at sewing.

Off to dreamworld she goes. She is saved by a nonconsensual kiss by that same traveling prince, who had slaughtered the evil witch en route to puckering up for the princess. Aurora and her prince are abounding with happiness and end up dancing the night away as her dress magically changes from pink to blue.

Life is but a dream for this Disney princess, and on the nights that I can’t sleep, I still wish I was Sleeping Beauty, but otherwise, I’ll pass on this one. Forced to live with her ugly stepmother and awful stepsisters (back when I first saw this movie, ugly and awful meant EVIL), Cinderella is the little slave girl who sees to all their demands. She cooks. She cleans. She sews. She very politely condescends to those who abuse her. Actually, the “Cinderella complex” refers to submissive women who have a desire to be taken care of no matter how dysfunctional and abusive their situation might be.

But alas, Cinderella is simply not able to change her horrid circumstances on her own. On top of her namesake mental malady, she also has Dependent Personality Disorder (DPD) which means she depends upon others to make decisions for her. Decisions, such as what to wear, were made for her by her animal friends and her fairy godmother. She didn’t exactly choose that glass slipper herself either.

All she needs is a pretty dress and a handsome, rich husband to pull her out of her misery, which is not such a great message to send to young girls today.

Oh, I almost forgot, she may have been a bit delusional and suffer from hallucinations. She did ride to the palace in a pumpkin you know. Although Alice is not really a “princess” she was the protagonist of a Disney movie that I loved. You don’t even have to be enrolled in Psychology 101 to know that this chick is certifiably nuts, cray-cray, a loony toon, gaga, half-baked, and unbalanced. Face it, Alice was a screwball.

Not only was this poor girl a delusional schizophrenic, but she had some serious image issues as well. She, like Snow White, had problems with mirrors, but in Alice’s case, she can’t seem to look in one and realistically view what her body truly looks like.

She is most definitely a manic depressive, experiencing extremely high moods and then crashing in hopeless depression. It’s not difficult to tell whether she is over-the-top ecstatic or terribly discouraged and literally drowning in a flood of tears.

Either she had too much of what the caterpillar was smoking, or she was one hot mess and a candidate for rehab.

Regardless, even though I love her hair, I’d never trade places with Alice.

So, I guess what this all winds down to is this:

I’m not a Disney princess (thank goodness). I’d take my sweaty do rag over a twinkly tiara any day. My family is not evil, and none of them, that I’m aware of, is plotting to kill me. I would never order pumpkin spice latte at Starbucks. (Yuck! Phooey!) I have never obsessed about keeping things clean, and never will. I have my sleep schedule and body image pretty much under control, and I live with a charming, princely man.

And I still believe in fairies.