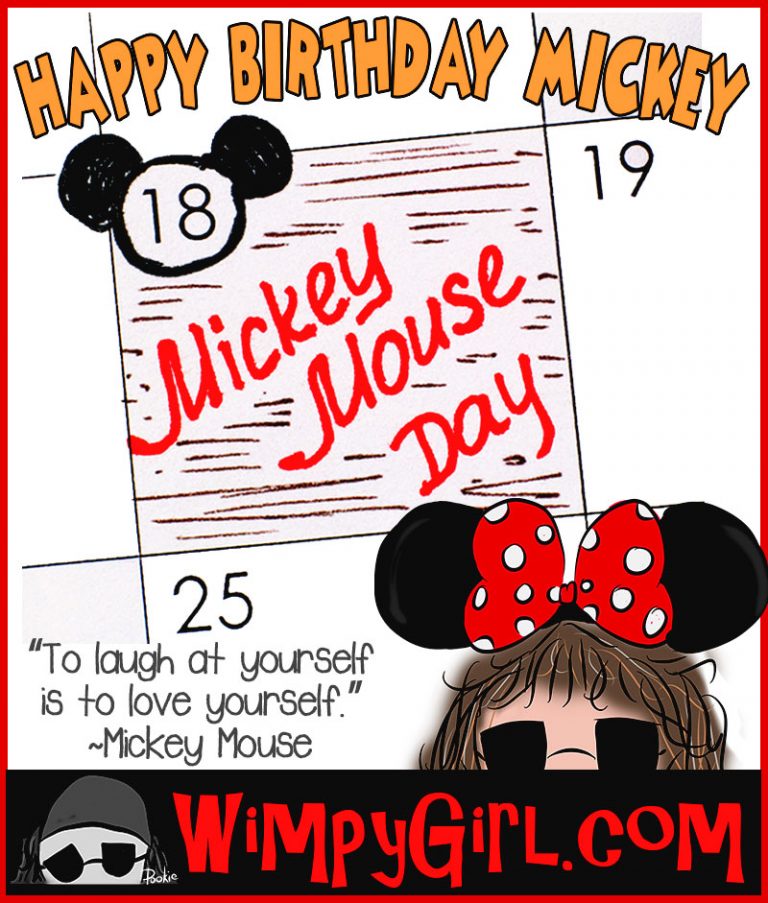 I read an article this past week about scientists in Japan that are studying lab rats who bop their heads to the beat of music. I kid you not. It’s the first study to prove that animals (or at least lab mice) have innate beat synchronization. Hmm. I wonder if these frisky critters prefer one type of music over another, like say, rap over opera, kpop over country, side A vs side B.  Check out the study here. If you prefer not to read all the scientific stuff, just watching the video is worth the click.

Of course this made me think of the mouse who really defined “synchronization,”  the rodent head banger of all time, the leader of the pack:

Today, on his birthday, it’s Mickey Mouse Day! On November 18, the incredible little fellow made his film debut in a short, animated feature call “Steamboat Willie,” in (get this) 1928! That means that today he is 94 years old! Mickey was the mouse of my childhood, one of my favorite cartoons, but, I sure didn’t realize he was that old, did you? It must be nice to have all those birthdays and never age. Sigh!

So here are a few other things I never realized about our birthday boy: What?
Actually, a Kansas City cartoonist named Ub Iwerks was the creator of Mickey. Iwerks and Disney were best friends since their teens. They worked together at the same Kansas City commercial art studio. Iwerks was fascinated by the idea of bringing still life cartoon images to life. Iwerks went on to be the genius behind Disney Studios special animated effects. He’s the one to thank for the scenes from “Sleeping Beauty,” “Mary Poppins,” and even Alfred Hitchcock’s “The Birds.” Wow!

That’s not to say that Disney did not contribute to make Mickey what he his today. Disney voiced and shaped the happy rodent’s personality as well as made Mickey a star, but, obviously he had a lot of help. It’s a good reminder that most creative genius involves a team effort, and behind every powerful mouse there might be a Walt Disney, and behind every Disney, there is at least one Ib Iwerks. Originally Mickey was a rabbit.

My childhood cartoon bubble continues to be burst! Geez!

In 1927, Disney created his first cartoon character, Oswald the Lucky Rabbit. But in a dispute with a business partner and Universal Studios, he lost the rights to the bunny. The loss of the rabbit inspired the creation of THE MOUSE. Guess Oswald wasn’t that lucky, huh? Mickey and Minnie are married

There was no chasing after cute toons for our mouse of the hour. He and Minnie were actually married when they were created and both made their world debut in 1928 in “Steamboat Willie.” If you ever feel like you’ve been married “forever” think about this pair. They actually have.

So that makes Minnie’s birthday today as well. How romantic! This was way before Pluto. in 1929, in his ninth movie, “The Karnival Kid,” Mickey finally spoke. The mouse obviously loved hot dogs. In fact, he even did a hot dog dance. Check it out. Mickey helped to make a lot of kids into stars.

I loved watching the Mickey Mouse Club (1955-1996) on tv when I was a kid. I so wanted to be a Mouseketeer. Of course my favorite kid in the Mickey Mouse Gang was Annette. But Annette Funnicello, even though Walt Disney selected her himself, isn’t the only Hollywood star to get her start from a mouse. Britney Spears and Justin Timberlake were both Mousketeers. Keri Russell, Christine Aguilera, Johnny Crawford (remember The Rifleman?), Paul Petersen (The Donna Reed Show), Don Grady (My Three Sons), and…Ryan Gosling all broke into show business with the aid of a mouse. Mickey gets my vote.

Aren’t you glad the US mid-term elections are over? Well, sort of over? Although Mickey has never officially run for public office he always gets write-in votes in most elections, especially Presidential ones. Unfortunately, write-in votes are not even counted in many precincts throughout the US, so we really don’t know how many voters favor a mouse over a man. However, voters can dream, right?

So, Mickey, today is your day and you so deserve it. For 94 years you have cheered us up and made us laugh. We wear your image on our shirts, your ears on our heads, and your hands on our wristwatches. You are the most recognizable character anywhere in the world. You have won an honorary Oscar, been a spokes-mouse through world wars, had several tv series and were the first animated character to get a star in the Hollywood Walk of Fame.

You are quite a guy Mick. You’ve got those Japanese lab rats beat, hands down.

Happy Birthday Mickey, from one of your biggest fans.