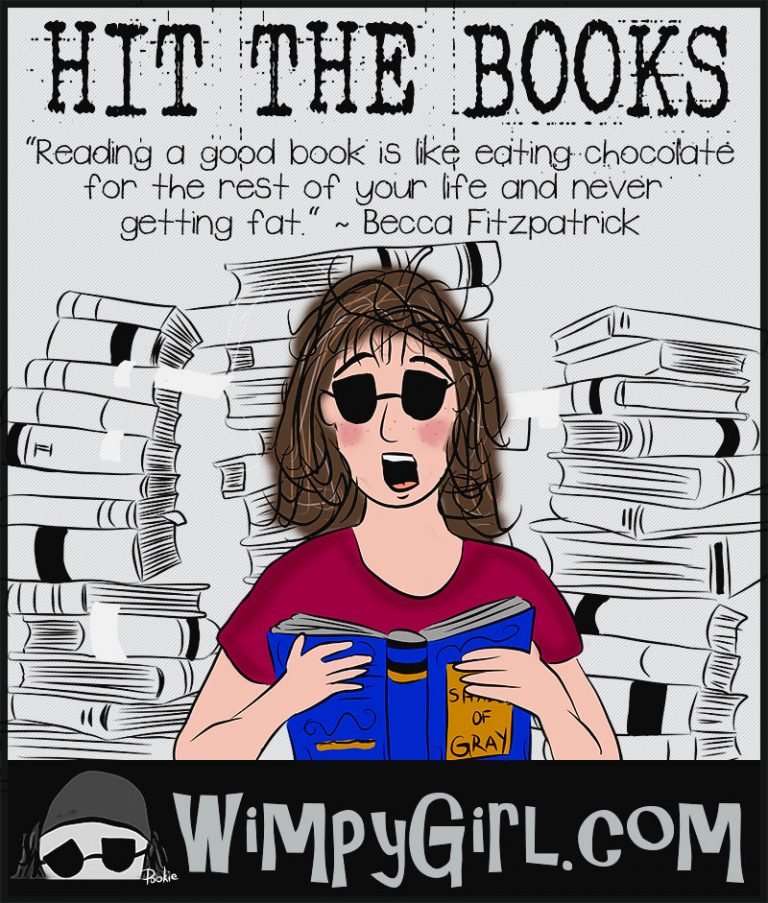 Calling all bibliophilic Wimpy Girls, Guys and Kids! Today is your day to find a comfy place, a good book (fiction or non-fiction) and read the day away!

I’m a book lover…on steroids, but I actually listen instead of read. I love audiobooks. They alIow me to multitask in a unique way. I can draw, design, and workout at the gym while listening to books. However, I’m not smart enough to write and listen at the same time, and trying to listen while I run/walk is disastrous. I get so absorbed in the book that I lose track of where I am and often end up hopelessly lost.  Figures.

Audible and Scribd are the gatekeepers to the extraordinary worlds that I visit daily through books.

So in honor of the day, I thought I’d share with you my list of my favorite running, exercising, motivational and inspirational books. The authors live all over the world, and even if you aren’t an avid exercise freak, I’ll bet you’ll enjoy them. Here we go. Born to Run: A Hidden Tribe, Superathletes, and the Greatest Race the World Has Ever Seen
by Christopher McDougall

When I first started running, I read this book. OMG! It blew me away and motivated me like no other. It’s about a tribe of indigenous people, the Tarahumara, who run in Copper Canyon (part of the Sierra Madres) in Mexico. I always used to think that Kenyans, as a group of people were probably the fastest endurance runners on the planet, but this book changed my mind. It’s what turned me on to barefoot running and helped me to realize that we, as humans, are all born to run. I read this book when I first started running in 2010, in one day! It’s that good. It’s the story of Louis Zamperini, a delinquent kid who as a teen, channels his angst into running. And, he’s fast. His speed leads him to the Berlin Olympics in 1936. He almost becomes the first runner to break the 4-minute mile. As an airman during World War II, Zamperini’s plane gets shot down over the Pacific and he eventually becomes a prisoner of war. It’s an amazing story that you’ll never forget.

“Only the laundry knew how scared I was.”
― Laura Hillenbrand, Unbroken: A World War II Story of Survival, Resilience and Redemption I love this book because Murakami is a writer who became a runner. He’s penned a lot of mystery/suspense novels and is a very gifted writer. This book is his memoir and is a tribute to running. He “tells it like it is” as he goes from being a chain smoker to becoming a marathon runner. He’s never won a marathon or competed in the Olympics, he’s just an ordinary best-selling author. In this book he allows us into what goes on in his head as he runs. It’s a wonderful, inspiring read. Chicken Soup for the Soul for Runners: 101 Inspirational Stories of Energy, Endurance, and Endorphins
edited by Jack Canfield

I listen to this book at the beginning of each new year. I love it because it includes the self-told stories of beginning joggers to ultra-marathon athletes. If you’ve ever attempted to do a lap around your neighborhood, you’ll be inspired.

“Life, like running, is about getting up and pushing on ahead, even if I’ve tripped on a pothole. It’s about keeping the rhythm and setting a pace. It’s about minding my injuries and allowing myself time to heal, but not letting injuries get the best of me. Running is like life; it is a glorious, albeit sometimes painful, act of always moving forward.”
― Jack Canfield, Chicken Soup for the Soul: Runners: 101 Inspirational Stories of Energy, Endurance, and Endorphins Alexi Pappas is a modern day Renaissance chick. Not only is she a professional athlete, she is also a writer, filmmaker and actress. She was a track competitor collegiately for Dartmouth and then University of Oregon, and then became a Greek citizen so she could represent Greece in the 2016 Olympics. This book is a series of essays about her Olympic dreams, dealing with depression, and learning to become a “bravey” girl. She shares some of the most intimate details of her life and the lessons she learned from each. Pappas says that all she ever wanted in her life is to matter.  It’s a great read.

“Good thing I didn’t accomplish all my goals yet because then what would I do tomorrow?”
― Alexi Pappas, Bravey Running With Sherman
by Christopher McDougall

I’ve known a lot of runners who run with their dogs, but have you ever heard of running with a donkey? This is a heartwarming tale of a rescue donkey named Sherman that MacDougall trains to run with him in one of the craziest races in America. You’ll have a deeper appreciation for all of our furry friends after reading this book.

“Movement is big medicine; it’s the signal to every cell in our bodies that no matter what kind of damage we’ve suffered, we’re ready to rebuild and move away from death and back toward life.”
― Christopher McDougall, Running with Sherman: The Donkey with the Heart of a Hero Running the Rift
By Naomi Benaron

This book is the fictional story of John Patrick Nkuba, a Rwandan boy who aspires to become an Olympic runner. It tells of his fight to survive as a Tutsi during the Rwandan Genocide. Nkuba holds fast to his love for running which ultimately saves his life. This is Naomi Benaron’s first novel, and she has superbly researched the horrific events that led to the Rwandan genocide. As a reader, you know it’s coming and you find yourself wanting to jump into the pages and warn John Patrick about what is to come.  Again, whether you run or not, this is an amazing story, and one you’ll never forget.

“How much this book of life changes, he thought. And we are not the ones to write the pages.”
― Naomi Benaron, Running the Rift 52 Ways to Walk
by Annabel Streets

I’ll be the first to admit that I probably do more walking than running nowadays. And, since I’ve been walking since I was 11 months old, I thought that I was pretty good at it and had perfected my technique. Oh contraire!

This book is an awesome, user-friendly guide to obtaining the full range of benefits from walking. It’s funny, inspirational and backed by the latest sports medicine research. Everything about us can be improved by judicious walking. Annabel Streets has written several other books on aging that are on my list to read. She might just be a Wimpy Girl.

And finally…for all book lovers who consider libraries almost sacred… A few weeks back I finished this book. I didn’t want it to be over…ever. It’s a book I will never, ever forget. It weaves a story through the lives of five main characters whose lives are divided by time and location. It is a beautiful homage to libraries and the ability that a powerful story has to endure time. Just read it. You won’t be sorry.

“Stranger, whoever you are, open this to learn what will amaze you…”
― Anthony Doerr, Cloud Cuckoo Land

So today, it’s okay to skip your “body” workout, and workout your mind. It’s okay to read all day if you feel like it. Heck, I may not even change out of my pajamas.

“The whole world opened to me when I learned to read.”
―Mary McLeod Bethune