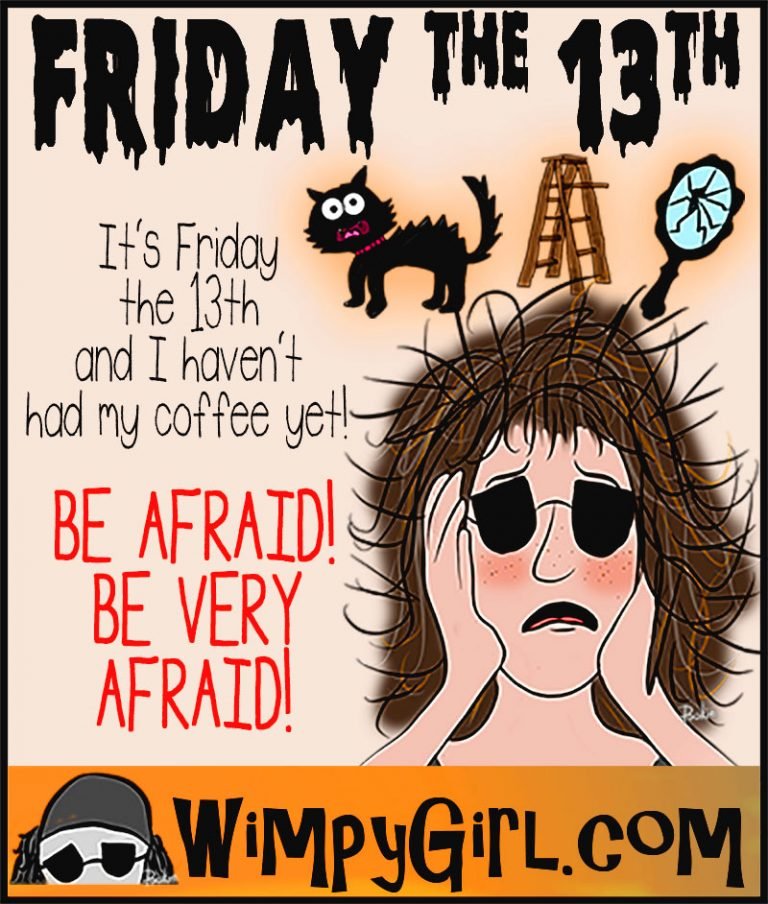 So, I’ve just got to know. When you woke up this morning and realized that it is Friday the 13th, did you stop and think, “Oh, wonderful. More than likely, it’s going to be a bad day.”

I know, I know, you are not a doom-and-gloom Debbie Downer, and you probably won’t let a mere number or a day of the week effect your joy…or luck. But, come on, I bet you hesitated and vowed to be extra careful throughout the day, just in case. I know I did.

So where on earth did this hokey superstition come from, and why on earth have so many people through the ages been spooked by it?

Just like walking under a ladder, crossing the path of a black cat, and breaking a mirror, Friday the 13th has long been considered a harbinger of bad luck. (Just ask the cast of the Friday the Thirteenth horror film series.) Nobody is quite sure who or where it started, but it was a long, long time ago.

In western cultures, the number 12 is considered “complete.” For example, there are 12 months, 12 days of Christmas, 12 signs of the zodiac, 12 labors of Hercules, 12 tribes of Israel, and 12 eggs in a carton…things like that. But 13? It’s kind of an oddball number. How many 13th floors can you find in tall buildings? According to people who keep up with stuff like this, at least 80% of all tall buildings in the United States do NOT have a 13th floor. Most hospitals and airports also avoid using the number 13 for rooms and gates. The fear of the number 13 even has its own psychological term: triskaidekaphobia.

The 13th of the month probably got its unlucky designation about 700 BC when the poet Hesiod warned farmers about how unlucky it was to plant their crops on this day. It had something to do with the waxing of the moon.

Many early Christians believed that because there were 13 guests at the table during the Last Supper it was a bad omen. And for a long time for dinner parties, gatherings, etc. folks believed it was extremely unlucky to seat 13 people at a table for a meal. It just wasn’t done.

During the late 19th century Captain William Fowler, a New Yorker, tried his best to remove the doom and gloom stigma surrounding the number by creating an exclusive society called The Thirteen Club. The group dined regularly on the 13th of each month in room 13 of Knickerbocker Cottage. They had a 13-course meal and before being seated each would walk under a ladder bearing a banner which read “Morituri te Salutamus,” Latin for “Those who are about to die salute you.” Four US presidents were members: Chester Arthur, Grover Cleveland, Benjamin Harrison and Teddy Roosevelt.

So, What’s So Freaky About Friday?

So all this is well and good, but why is Friday considered so ill-fated? It couldn’t have popped up from nowhere. It’s the day before the weekend, TGIF, for heavens sake.

Again, many suggest that Friday’s negative rap was based with early Christian tradition. Jesus was crucified on a Friday. It was also said that Eve gave Adam the apple on Friday and Cain killed Able on (you guessed it) a Friday. Hmmm…I didn’t realize they had calendars back then.

Chaucer in Canterbury Tales fashioned Friday as “a day of misfortune.” But remember that Chaucer’s works are packed with irony and sarcasm. He would be a great Internet troll today. Nobody is quite sure if he was being superstitious or sardonic.

“Now Friday came,
you old wives say,
Of all the week’s
the unluckiest day.”

Mix Friday and 13 Together and KA-POW!

In recent history, there are many recognizable dates that that were the harbingers of terrible things. For example, December 7 – Pearl Harbor Bombing, and September 11 – Twin Towers Disaster were very grim days. But Friday the 13th has caused fear for centuries.

It was on Friday, October 13, 1307, that King Philip IV of France had hundreds of the Knights Templar arrested. Philip accused them of all sorts of illegal behaviors, but he actually wanted access to their vast financial wealth. Many of the Templars were executed and many think this was the start of the superstition.

But even more think that it wasn’t until the early 20th century that the combination (Friday + 13) really “set in” as something to fear. In 1907, Thomas Lawson wrote a book called Friday, the Thirteenth. Lawson was a stock market promoter (think Wolf of Wall Street) and created a fictional tale of a stockbroker who deliberately crashed the market on this fateful day. Lawson may be devilishly pleased that the stir his work caused has lasted over 100 years. Today, the fear of Friday the 13th habitually causes a loss of between $700-900 million in revenue because shoppers and investors don’t was to “press their luck” on that day. You can fly cheaper on Friday the 13th because no one wants to be in the air on the unluckiest day of the year. Blame Lawson.

On a more positive note, car insurance companies report that there are FEWER accidents on Friday the 13th. Everyone is being super careful, I guess.

So how’s it going to be for you today? Are you going to blow it off, take the middle ground and just be cautious, or hunker down in your safe place until midnight of the 14th?

Things have been quirky the past few years. So, who knows what might happen?

Frankly, to me, it’s just another day. I’m always cautious anyway…generally. Okay, maybe I’ll be a little more cautious today AFTER I’ve had my coffee.

And, if you are thinking of staying hidden, out of fear, my advice is to you is to throw a little salt over your shoulder and enjoy the day. You’ll be fine.