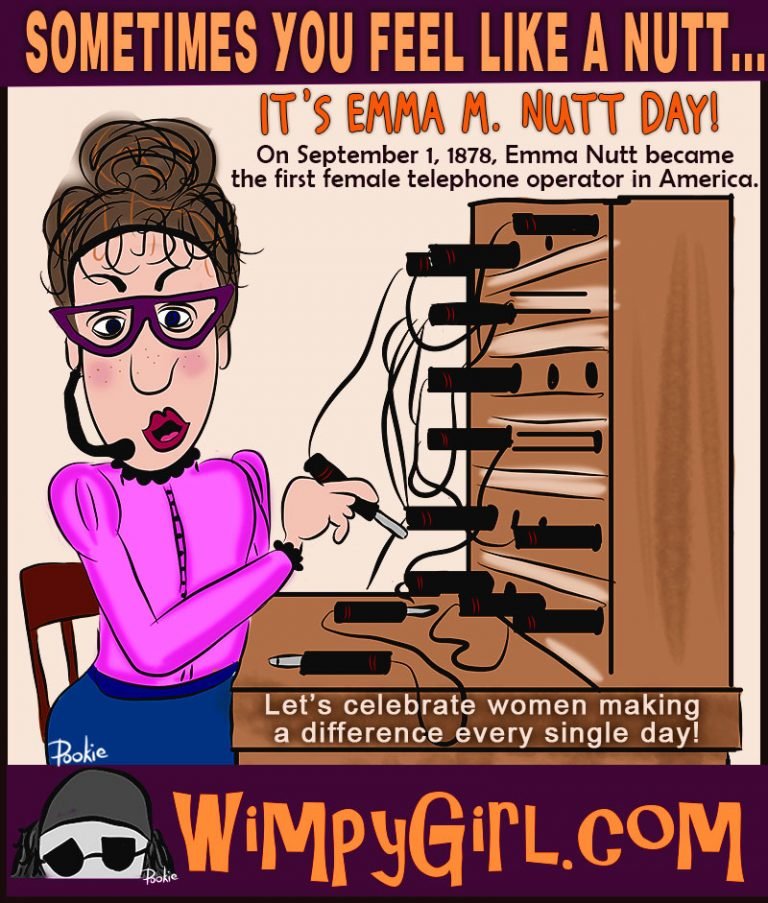 Have you ever even heard of Emma M. Nutt?

Don’t you think that, as a child, she was probably teased a lot about her name? I guess being a Nutt  served her well because Emma M. Nutt was an incredible woman. On September 1, 1878, Emma became the first female telephone operator in America. If you are like me, your phone is a very important part of your existence. And, if it weren’t for Emma, our phones might not be what they are today. Pressing All the Right Buttons

Think about all the issues you had the first time you ever used a computer, or even better, the first time you ever used a smart phone. Things like how to turn it on, which buttons to push, where to find what you were looking for, etc. were baffling. Back in the late 1870s, people were just as confused with how to use Alexander Graham Bell’s new contraption called the telephone. In order to speak to another person, someone had to physically connect your line with the line of the person you wanted to talk to. Up until 1878 telegraph operators, who were usually teenage boys, were the vocal connectors that ran the phone switchboard lines. Let me repeat, they were teenage boys. Not that I have anything against teenage boys, but it’s not surprising that when they were not being curt and rude to callers, they were playing phone pranks. (Remember, “Do you have Prince Albert in a can?” and such).

So Bell, had the idea that women might be better suited to represent his new invention. And so, on September 1, 1978, he hired Emma M. Nutt, a former telegraph operator, to be the world’s first female telephone operator. Within a few hours, Emma’s sister, Stella, became the second. Both were employed by the Edwin Holmes Telephone Dispatch Company in Boston.

In the late 1800s women were not even able to vote and own property and very few had careers outside the home. And yet, the Nutt sisters did such a great job that eventually all telephone operators were women. Many women saw this as a great opportunity to get themselves out of factories and in some cases from home. But the requirements to get the job were almost draconian. They had to pass height, weight and arm length tests to ensure that they could work in the tight switchboard areas. They could not be married. They had to sit with perfect posture in straight-backed chairs for long hours. Talking to other operators was forbidden, and they were to respond to customers quickly and patiently, even when the callers were rude.

Nutt and her coworkers worked for 54+ hours a week for a meager $10 a month. The poor pay and working conditions eventually drove the switchboard operators to organize and go on strike. In 1919, the operator strike paralyzed the telephone-dependent New England area. Think what would happen today if we didn’t have phone service. Needless to say, the women got a pay increase.

Stella Nutt, Emma’s sister, only worked as an operator for a few years and then had to quit her job because she got married. But not Emma. Even though she was a beauty, Emma never married and worked as a switchboard operator for 33 years.

And get this, she evidently kept her mind in the game as well as her butt in her telephone operator’s chair. She claimed to know all the telephone numbers in the New England Telephone Company directory! Incredible! Sometimes I forget my own number.

Although Emma’s exact birth date is not known, it is known that she retired after 33 years, and died shortly thereafter. She was 54-55 years old.

The Boston Telephone Dispatch Company consolidated with other small companies to form the New England Telephone & Telegraph Company. In 1879, it became the Bell Telephone Company, which evolved over time into what we know today as AT&T.

One Ringy Dingy – “Is This the Party to Whom I’m Speaking?”

In the 1960-70s, Rowan & Martin’s Laugh In dominated comedy tv. If you ever watched you probably remember Lily Tomlin’s portrayal of Ernestine, the telephone operator. With snorts and irreverent quips, Ernestine, like Emma, was a classic.

And you want to know something really freaky? Lily Tomlin’s birthday is September 1st, the date that Emma was hired to mind the phonelines of Boston. Ernestine was meant to be.

Today we celebrate Emma, a Superwoman without the cape, who expertly did her job regardless of the challenges she faced daily. She punched and plugged with finesse and bravado, and is a role model for all women today.

I’ll bet she was a Wimpy Girl too.