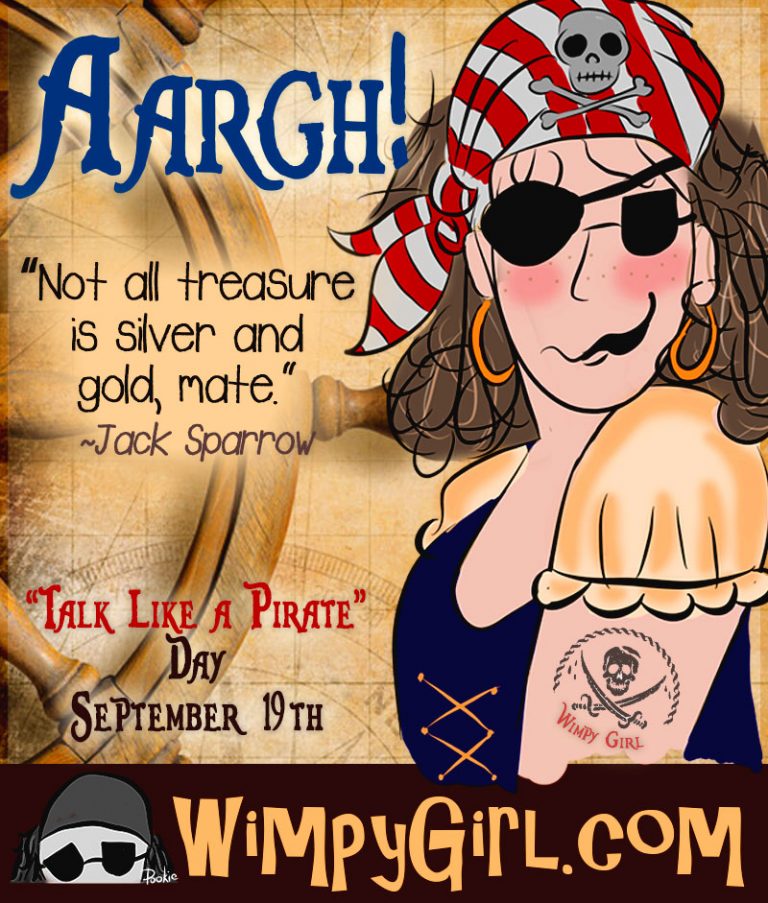 This is a holiday that I’ve always wanted to celebrate, so finally let’s do it!

Was it Started by Real Pirates?

Actually, “Talk Like a Pirate” Day was started by two guys, John Baur and Mark Summers, who were playing racquetball back in 1995. In a “pirate-y” way these dudes perhaps missed a few shots and let out a series of “Aargh’s” and that got the cannonball rolling. Okay, that’s how they claim their pirate-y jargon became a part of their daily speech. Who knows? And, frankly, who cares? These two are very creative, and I’m glad they shared their “ahoy” moments with the rest of us.

So that you don’t have to read through Moby Dick (it’s really, really, really long) I’ve found plethora of words and phrases that make the basic “aargh” sound like you stubbed your toe. Here’s a few of my favorites I’ve from PirateGlossary.com.

An interjection used to hail a ship or a person, or to attract attention.

The state of a sailing vessel which cannot move due to a lack of wind.

1. To secure or make fast (a rope, for example) by winding on a cleat or pin.
2. To stop, most often used as a command.

A ship holed or pierced by its own anchor.

An exclamation of surprise, short for “God blind me!”, which is very common to this day in Britain and sometimes shortened less to”Gor blimey” or “Cor blimey.”

To spend the night in a house of ill repute.

To procure (sailors or soldiers) by trickery or coercion, or one who crimps.

A fictional place at the bottom of the ocean. In short, a term meaning death. Davy Jones was said to sink every ship he ever overtook, and thus, the watery grave that awaited all who were sunk by him was given his name. To die at sea is to go to Davy Jones’ Locker.

A warning issued before a cannon is fired.

The refusal to spare lives of an opponent. Pirates raise a red flag to threaten no quarter will be given.

A person who has a red nose because they drink too much alcohol (probably rum).

An interjection meaning to come to a halt.

Used to express surprise or joy, to attract attention to something sighted, or to urge onward.

A document given to a sailor (privateer) giving him amnesty from piracy laws as long as the ships plunders are of an enemy nation. A large portion of the pirates begin as privateers with this symbol of legitimacy. The earnings of a privateer are significantly better than any of a soldier at sea. Letters of marque aren’t always honored, however, even by the government that issues them. Captain Kidd had letters of marque and his own country hanged him anyway.

To lean to one side.

A style of clothing best suited to land. A pirate, or any sailor, doesn’t have the luxury of wearing anything loose that might get in the way while climbing up riggings. Landsmen, by contrast, could adorn themselves with baggy pants, coats, and stockings.

To be stranded, particularly on a desert isle.

A common pirate law meaning a crew received no wages, but rather shared whatever loot was taken.

A conference or discussion between opposing sides during a dispute, especially when attempting a truce, originating from the French, “parler,” meaning “to speak.” The term was used in “Pirates of the Caribbean: The Curse of the Black Pearl” as part of Pirate law.

Derived from the idea of “shelter”, quarter is given when mercy is offered by pirates. Quarter is often the prize given to an honorable loser in a pirate fight.

An exclamation meaning another ship is in view. The sail, of course, is the first part of a ship visible over the horizon.

An expression of anger or derision meaning “Throw that overboard!”

The ability to adjust one’s balance to the motion of a ship, especially in rough seas. After walking on a ship for long periods of time, sailors became accustomed to the rocking of the ship in the water. Early in a voyage a sailor was said to be lacking his “sea legs” when the ship motion was still foreign to him. After a cruise, a sailor would often have trouble regaining his “land legs” and would swagger on land.

An expression of surprise or strong emotion. In stormy weather and rough seas, the support timbers of a ship would “shiver” which might startle the crew. The phrase may have been less common during the Golden Age of Piracy than it had become later in fictional works.

A phrase used to wake up a sleeping pirate.

An expression of surprise. Many pirate exclamations used exaggerated imagery to heighten a point. Ye might say the sailors were punchy or a bit melodramatic after a lengthy stay at sea.

This is what pirates might call someone they don’t like, the idea being that a biscuit eater is refined and, well, not a pirate.

To take a nap. On the deck of a ship, between planks, was a thick caulk of black tar and rope to keep water from between decks. This term came about either because sailors who slept on deck ended up with black lines across their backs or simply because sailors laying down on deck were as horizontal as the caulk of the deck itself.

To haul the anchor up; more generally, to leave port.

In case you don’t want to memorize the above, here’s a handy Pirate Speak translator (compliments of LingoJam) that translates plain old mundane English into the salty vernacular of a pirate. It works a lot like Google Translate, in a pirate-y way.

So, after all this, whether you think you’ve perfected your swagger or are ready to walk the plank, you have to admit that “Talk Like a Pirate” Day is fun.